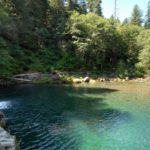 Oregon is one of America’s West Coast States. It sits in the Pacific Northwest, where it generally enjoys a temperate climate with seasons. Due to its location on and/or near the Ring if Fire, Oregonians have experienced earthquakes. There are many concerns about earthquake safety and how well buildings can tolerate earthquakes. Some people say that the northwestern states on the West Coast of America are not as well-equipped, in terms of earthquake safety, as those in California. This has to do with the earthquake problem being given priority only more recently, when many of the now-standing structures were already built.

For people who live in Oregon, it is fact of life that, someday, the Cascadia Subduction Zone will rumble, sending a huge earthquake throughout the state. The Oregon Department of Emergency Management has come out with a map of Oregon, shading in different areas of the state based upon how they think the damage will appear. According to their projections, the western part of the state will suffer from the most damage. The areas eastward will experience less damage. The coastline will sustain critical amounts of destruction from both the earthquake and the resulting tsunami.

Astoria is built on the west coast of Oregon, bordering the part of the Columbia River that is really close to the ocean. When looking at Astoria or real estate, you should take into account that the town is really close to the ocean. There is a risk that a surge of water may make its way up the Columbia River in a tsunami scenario. Many municipal buildings, homes and public places are built in inundation zones. There are even some parts of the neighborhood that could be inundated if a distant tsunami from somewhere far across the Pacific Ocean were to happen. In the case of the Cascadia earthquake scenario, it is projected that people in Astoria would have about 40 minutes to run to higher ground before seeing the tsunami hit land. If a major earthquake happens, there is a good chance that the Bear Creek Dam will fail, causing a flood that would happen before the tsunami and possibility result in a loss of life.

If you are okay with these risks and have made plans to stay safe, then move to Astoria. Astoria is a beautiful area. As of 2014, the population was 9,421, with 97% of the city living an urban lifestyle. About 82.1% of the population was white. Hispanics made up 9.5% of the neighborhood and people of two or more races made up 5.4%. Compared to many other places in America, people in Astoria tend to be well-educated. About 32.2% of people have a bachelor’s degree or higher, and about 14% have a graduate or professional degree.

Astoria has a unique flavor to it. The words Victorian, fishing village and Scandinavian all describe the interesting mix that the vibe of this town has. Astoria has a lot of historical sites, as well as local beer brewers. Wildlife is not far away, and one can hike Saddle Mountain or look at sea lions on the coast.

Yoga: a beginner’s guide to the different styles