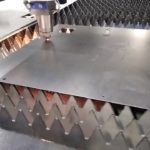 There are a lot of things that lasers are used for. One of the common uses for lasers is cutting metal plates in a clean, accurate way. The process will vary according to the type of metal being cut. Some of the metal that is most commonly used with laser cutting include aluminum, mild steel, and stainless steel. while other types of metal can be cut with lasers, these are the types that most people have found the best results for.

Laser stands for “Light Amplification by Stimulated Emission of Radiation” and most people know that they can be quite powerful, but how is it possible for something as simple as light to cut through something as hard as metal? Not only can lasers cut through metal if done properly, but they can also create some impressively intricate designs. The area that is affected by the heat is rather small which means that the cuts can be incredibly accurate when compared to other methods of cutting metal.

You cannot just use any laser to cut through metal and you might not even use the same one to cut through different types of material. Shorter wavelengths are able to do cutting that is finer but unfortunately not all metal will react with all wavelengths the same. laser cutting doesn’t just use lasers to cut the metal. They also require the use of what is known as an assist gas. The gasses that are used for any steel laser cutting perth are usually oxygen and carbon dioxide as they are usually the most effective. Unfortunately, it can leave the metal blackened around the cut because of the oxidation. The other option is the inert gas nitrogen that provides a weaker cut but also prevents the oxidization of the material being cut.

The laser beam forms a powerful column of light that is one color and one wavelength. Most of the lasers used to cut metal are on the infrared spectrum. When the laser beam comes out of the laser resonator, it’s about 3/4″ in diameter. In order to get to its destination, it can be redirected by different mirrors before going through a nozzle after it has been focused. This nozzle has compressed assist gas flowing through it.

In order to focus the laser beam, either a curved mirror or special lens is used. The way that the laser is focused is extremely important as the energy being directed at the focus spot needs to be as consistent and round as possible in order to get the best results possible for the cut. This is a lot like when people use magnifying glasses in order to start a fire by focusing the sun on a particular spot. If just a magnifying glass and the sun can start a fire, you can get an idea of what a high powered laser could do if it was focused properly on an object. As long as all of the parameters of the laser cutting are taken into account, it can provide a reliable cut.